There's nothing English about the English Defence League, apart from the poor saps who are manipulated into supporting this American-based lobby group. 
The Center for Vigilant Freedom, a project of the Center for Security Policy, has been rebranded as the International Civil Liberties Alliance and its network of forums, news aggregates, bloggers and internet propagandists have become the ideological driving force behind the far-right physical-presence street-force. Two EDL delegates recently attended the ICLA's Counter Jihad Europa conference, which has beeen held annually since 2007. The Counter Jihad Europa project was set up as "clearinghouse for national initiatives to oppose the Islamisation of Europe."

The English Defence League provides a forum for promoting an extreme literal reading of Islam, which is presented as though it were believed by 'all Muslims'. News reports of criminal acts committed by any Muslim from any part of the world are used to demonise Islam, before directing the ensuing disgust and outrage and fear that binds the English Defence League members together to violent confrontations and intimidations of Britain's Muslim communities and more recently, Trades' Unions, the British Left and assorted social campaigns and movements.

ICLA affiliate, the ochlocrat Alan Lake has openly threatened the lives of the new British Prime Minister, David Cameron, and his wife, and any British person who refuses to stand with them against all Muslims. Make no mistake, their network of propagandists is very active across the British internet, using the malicious lies propgated by the ICLA network, to undermine the safety and security of all British people.

The English Defence League is a American-led, business-driven vigilante group, focused on defending the freedoms interests of the now ousted neoconservative administration and its business associates, pressurising the new coalition British Government and its armed forces by amassing a vigilante street-army whose violent demonstrations have injured both the public and several individuals serving with police force and the armed forces.

The total cost to Britain's city-centre businesses in lost trade is not yet known, whilst the cost to the British taxpayer of £2 million to cover demo policing for the English Defence League has caused resentment among many, at a time when local councils are facing severe cuts to their public services.

Britain's support for the Iraq war was based on fabricated evidence for weapons of mass destruction, supported by opinion journalism circulated by this network of right-wing bloggers and propagandists. English Defence League are obtaining most of their 'evidence' and opinions from this internationally-placed network of mainly un-English propagandists, who use the internet to propogate fear and spread disinformation.

On the domestic front, this group of propagandists are seeking to wrongfully label anyone in Britain who follows the religion of Islam as 'extremists', and manipulate, bully, threaten and force the people of Britain and their government with the proto-fascist street-force, 'English Defence League'.

No-one in Britain is safe from their malicious rumour-mongering. If you stand against them, their activists begin smear-campaigns, often puerile in nature, but well-targetted nonetheless and reminiscent of the tactics of R*dw*tch.

Most recently, English Defence League attempted to draw support from Britain's Jews by creating what has been referred to as a 'semi-fictitious' Jewish division. Jewish leaders in Britain have consistently rejected calls by two CVF/ICLA-associated groups operating in Britain -- SIOE and EDL -- as racist and Islamophobic.

Britain's Jewish community likened the malicious lies of the EDL and SIOE about British Muslims to those spread by Hitler about Jews. This CVF/ICLA- alliance, using the EDL divisions on facebook and also their forum, then began threatening Britain's Jews, using characteristic ad-hominems and veiled threats, calling them Kapos and dhimmis, and falsely claiming that 'hundreds of British Jews' had joined. These claims regarding the depth of British Jewish support are false. 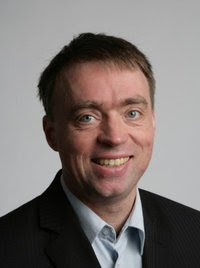 A detailed analysis of their facebook group membership showed Jewish support (no greater than 30%) came from outside of Britain, mainly from American, Canadian and French Kahanist-linked and Likud-Herut activists, whilst the bulk of supporters (70%) came from EDL rank-and-file.

Among those included as movers and shakers in the CVF propaganda network (CVF, ICLA, SIOE & SIOA) are Aeneas Lavinium (CVF/ICLA, EDL), Alan Lake, Gaia, Henrick Clausen of news aggregate europenews.dk, UKIP's Magnus Nielsen, and the usual pseudonym'd suspects from the international 4 Freedoms and ICLA (was CVF). (remove %20 from some links), who all hope to ride the wave of ochlocratic populism that is the EDL.

As with their previous efforts to lobby pressure on the Labour government, this American advocacy group have several other aims, besides their attempts to astroturf division on the streets of Britain's communities:

- spread malicious lies that British Muslims are capable of betraying their own country, Britain, and are a fifth column;
- pressurise British Jews into supporting their racist and Islamophobic demonstrations;
- astroturf support from a cross-section of British society (united through fear of Islam) to reject human rights act;
- force Britain's withdrawal from the European Union; ensure Turkey does not enter the EU;
- garner support for proposed attacks on Iran;
- increase support for a one-state solution to the Israel-Palestine; decrease support for a two-state solution in Israel-Palestine;

The English Defence League has become a vigilante street-army, led and fed ideologically by US-think tank and business-interests with many of their website press releases written by CVF/ICLA associates and possibly some of their speeches too.


More on the courting of Europe's far right from Toby Archer: The impact of the war on terror and the counter-jihad blogosphere on the European Far-right. 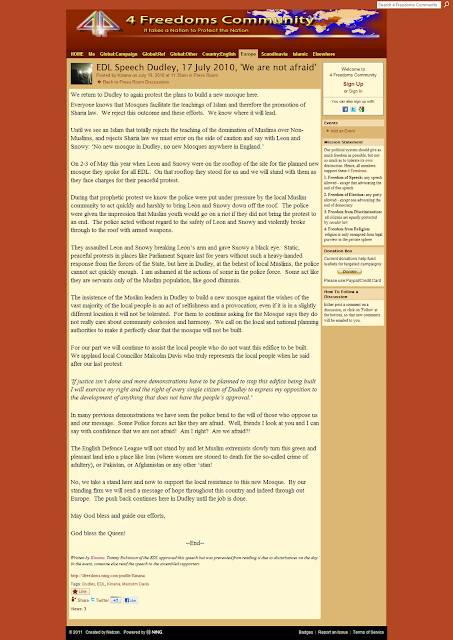 “Anarchy is not a thing of the future, but of the present; not a matter of demands, but of living”. – Gustav Landauer